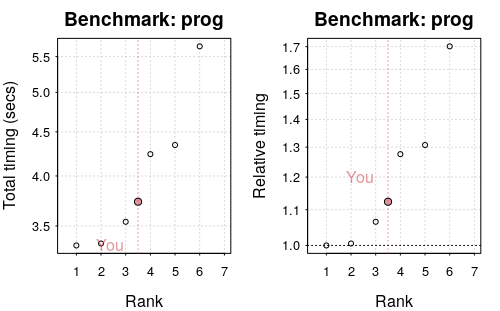 When discussing how to speed up slow R code, my first question is what is your computer spec? It’s always surprised me that people are wondering why analysing big data is slow, yet they are using a five-year-old cheap laptop. Spending a few thousand pounds would often make their problems disappear. To quantify the impact of the CPU on analysis, I created the package {benchmarkme}. The aim of this package is to provide a set of benchmarks routines and data from past runs. You can then compare your machine, with other CPUs.

If you have less than 3GB of RAM (run get_ram() to find out how much is available on your system), then you should kill any memory hungry applications, e.g. Firefox, and set runs = 1 as an argument.

To benchmark your system, use

and upload your results

You can compare your results to other users via

This function benchmarks reading and writing a 5MB or 50MB (if you have less than 4GB of RAM, reduce the number of runs to 1). Run the benchmark using

By default, the files are written to a temporary directory generated

which depends on the value of

You can alter this to via the tmpdir argument. This is useful for comparing hard drive access to a network drive.

As before, you can compare your results to previous results via

The benchmark functions above have a parallel option - just simply specify the number of cores you want to test. For example to test using four cores

Previous versions of the package

This package was started around 2015. However, multiple changes in the byte compiler over the last few years has made it very difficult to use previous results. Essentially, the detecting if and how the byte compiler was being used became near on impossible. Also, R has just “got faster”, so it doesn’t make sense to compare benchmarks between different R versions. So we have to start from scratch (I did spend a few days trying to salvage something but to no avail).

The previous data can be obtained via

The package has a few useful functions for extracting system specs:

The above functions have been tested on a number of systems. If they don’t work on your system, please raise GitHub issue.

A column of this data set contains the unique identifier returned by the upload_results() function.

The function Sys.info() does include the user and nodenames. In the public release of the data, this information will be removed. If you don’t wish to upload certain information, just set the corresponding argument, i.e.