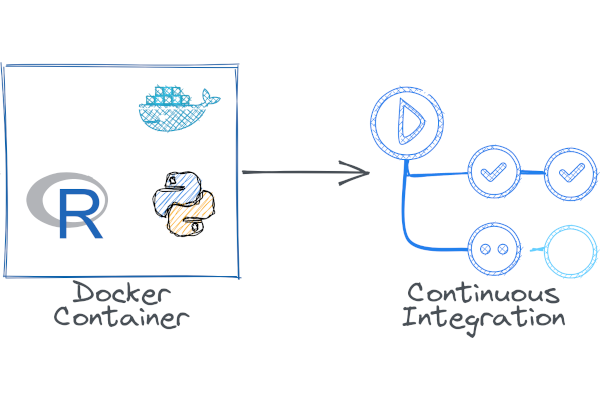 Over the last few years, we increased both the number and types of training courses we offer. In addition to our usual R courses in {dplyr} and {shiny}, we also offer training on Docker, Python, Stan, TensorFlow, and others.

As the number of courses we offer increased, so did the maintenance burden of our associated training materials (lecture notes, slides, exercises, and more). To ease this burden, and to assist in ensuring that our training materials build consistently, we developed an R package called {jrNotes2}. Amongst other things, this package ensures that all courses:

To make a change to course content, a team member must push their suggestions to a branch on GitLab. This action launches a CI job, which runs a Docker container that performs a set of checks. The templated .gitlab-ci.yml file ensures that every course undergoes the same build process and quality-assurance checks. If the content passes these checks, and an eligible approver approves the changes, then the changes are merged into the main branch.

This means course content in a main branch should never fail our checks. Well, not quite…

Why we can’t freeze all dependencies

When teaching a course, we want to teach with the exact same packages an attendee would get via an install.packages() or pip install command. This means we must always use the latest versions of packages available on CRAN and PyPI. However, always using the latest available packages has it dangers: a change to a package used by a course can suddenly cause our teaching materials to begin failing our build checks.

To try and pre-empt package changes breaking our training materials we use scheduled CI runs. That is, at regular intervals a CI job automatically runs our tests and checks against a course’s training materials. If a course’s materials fail these checks, we are notified via a message in a Slack channel. Around early January, we started getting notifications about our Introduction to Python course:

Unfortunately, the traceback given by the CI wasn’t the most enlightening:

As far as we could see, everything appeared roughly the same on all three systems: with all three running the same operating system, the same R version, and using the same package versions.

Whilst we could reproduce the error in a docker container, the error was difficult to debug as

In short, whilst we had a reproducible example of the error, it was only reproducible by a Jumping Rivers employee, and it was far from a minimal example.

To make progress, we had to simplify the docker container. We asked ourselves the following questions:

After all of our simplifications, we arrived at a minimal reproducible example with the Dockerfile:

By simplifying the problem, we were now in a position to ask for help from others.

As this appeared to be a bug (it used to work, but now it doesn’t), we raised an issue against the {reticulate} repository.

Soon after posting we received a response from one of the {reticulate} developers. Their response revealed that matplotlib was nothing but an innocent bystander in our issue, and that the real culprits were the incompatible BLAS (Basic Linear Algebra Subprograms) libraries being used by R and numpy!

The suggested solution was to was compile the numpy package from source within Docker. However, compiling numpy at container runtime added around 3 minutes to the CI checks every time they ran. As such, we opted to build the numpy package from source at image build-time, effectively caching the package build, and avoiding re-compiling numpy every time our build tests ran against our training materials.

Although compiling numpy from source did fix our issue, it currently presents as more of a workaround than a long-term solution. Hopefully, a future change to the BLAS libraries used by the rocker image series or numpy, can allow the two to be friends again. Here’s to hoping!