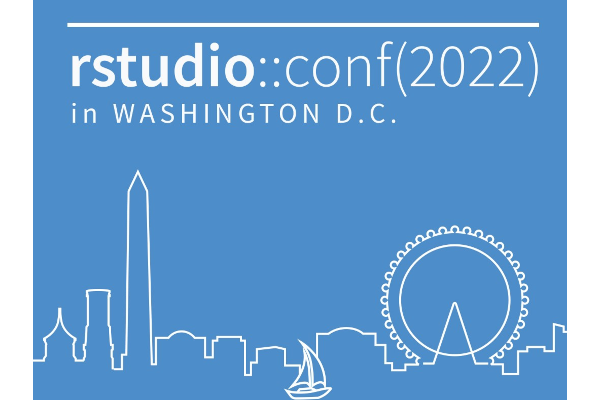 July 25 - 28 2022 saw thousands of people attend rstudio::conf(2022) both in-person in Washington D.C. and virtually from all over the world, including a few of us from Jumping Rivers. Here’s a recap of the big news, and a few of our personal highlights from the conference!

The secrets are out!

There were a couple of big announcements during the conference that it would be remiss not to mention.

The biggest announcement of the conference was that as of October 2022, RStudio will have a new name: Posit. RStudio are committed to developing open source software for data science, scientific research, and technical communication, and for the past few years have been extending support for additional programming languages beyond R. RStudio Connect, RStudio Workbench, and RStudio Package Manager will become Posit Connect, Posit Workbench, and Posit Package Manager - making it clearer that these products support multiple languages. But don’t fear - RStudio are not abandoning R, as most of their open source software will continue to be predominantly developed for R. And the RStudio name will live on - returning to the days when RStudio referred to the IDE.

In keeping with the theme of supporting multiple programming languages, Joe Cheng’s keynote on Wednesday afternoon revealed the release of Shiny for Python. Shiny is designed to make it simple to build interactive web applications, and now you can build them using Python as well as R. We already use both Python and R at Jumping Rivers, so this is an exciting development for us - we’ve already started playing with it!

Although Quarto has been available for a few months now, rstudio::conf(2022) marked it’s official announcement. Quarto is essentially the next generation of RMarkdown - used to join your code together with textual descriptions to create outputs in multiple formats with support for R, Python, Julia, Javascript, and many other programming languages. The keynote from Mine Cetinkaya-Rundel and Julia Lowndes showed just how incredible Quarto is for authoring and collaborating on documents in multiple formats and multiple languages. I’d definitely recommend catching up on this talk when the recordings are released if you missed it!

There were so many incredible talks throughout the conference (and many more I’m excited to catch up on the recordings of), so here are just a few favourites.

The Past and Future of Shiny

It’s been ten years since Shiny was first released. In this keynote, Joe talked about the journey Shiny has been on - from the moment Shiny was first created (and how it was named), to the announcement of Shiny for Python (and his “you write the book and I’ll build you a bike” exchange with Hadley).

In this talk, Tan showed us how to transform R scripts into projects that can live forever. He talked about converting scripts to R packages, and using some powerful features of GitHub (including GitHub Actions and GitHub Releases) to make your projects useful even after you’ve stopped developing them. Tan’s talk materials are available on GitHub.

Many of us have inherited projects with promises that the code will just work - and then it doesn’t. Liz talked about how you tackle the problem of messy projects, including using thoughtful documentation to make the job a little easier for the next person to inherit it. Liz’s talk materials can be found on her website.

I think 3D plots are often unfairly maligned, and Tyler’s talk on how to build 3D visualisations in R showed just how informative and engaging they can be when you do them well. He also introduced the {rayrollercoaster} package for building 3D rollercoasters in R, which is one of the coolest things I’ve seen in a while.

As well as attending talks and chatting to conference attendees, we gave a couple of talks of our own.

Colin’s lightning talk on diffify.com showed how to easily compare versions of R packages, and highlighted changes in {lubridate} as an example. Colin’s slides can be found on GitHub.

Nicola gave a lightning talk on building multilingual Shiny apps where she talked about why it’s important, and how bar charts can suddenly become not so simple when you need to output them in multiple languages. Nicola’s slides can also be found on GitHub.

Recordings for talks will be available online in a few weeks but if that’s not enough, you can already sign up for next year! The first ever posit::conf(2023) will take place in Orlando, Florida on May 22 - 25, 2023. Early bird registration is open now!