Have we got NEWS.md for you 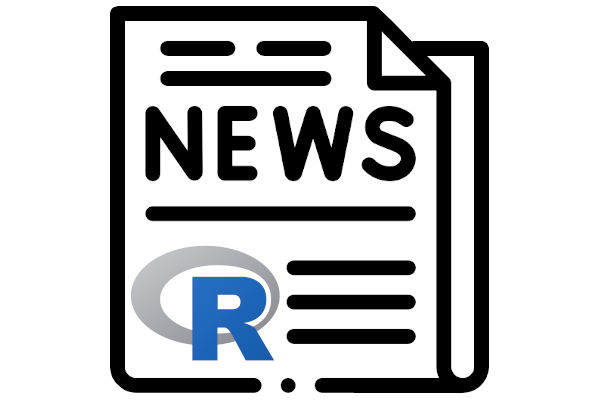 When developing a package it is essential to track the changes you make to your code. This is especially vital if they are breaking changes which have implications for any code written that depends on your package, i.e. a major version bump. Although you can always look back at your version control history in git, it is also convenient to have documentation which summarises the changes.

This is where the NEWS file comes in. Usually a .md file, the NEWS contains a description of the changes made between each version of a package up until the latest version. It is used to log things such as new features that have been added or bugs that have been fixed.

In this blog post we will look at how to write a NEWS file and what guidelines and good practices there are to follow.

Who uses the NEWS

A NEWS file is useful for developers to keep track of changes. However, it is primarily looked at by users of the package to check any changes in a new version that could affect or be of interest to them. Therefore, the changes logged in a NEWS file are specifically user-facing, rather than a complete list of all changes.

There is not really a strict set of rules when it comes to NEWS files in R. Nevertheless, there are some rough guidelines to keep in mind. See, for example, Sec 1.1 of the R package manual and Ch 18 of R packages (second edition).

Some R package universes also have their own NEWS file guidelines. For example, tidyverse, rOpenSci and Bioconductor. These guidelines have a lot of overlap and mostly follow what we will detail in the following sections.

Let’s first consider where the NEWS should sit within your package.

The NEWS file is usually found at the top level of the package folder, and can take one of the following formats:

Whether you include a NEWS file is actually entirely optional. From our own analyses of the CRAN packages for diffify.com, we have found that less than half contain NEWS!

The R package manual recommends the GNU standard. Referring to Sec 6.7, these guidelines state the following:

What exactly is meant by the first point here? In general, the NEWS is intended first and foremost for the package users. It should therefore focus on changes that are likely of interest to the users, including new features, bug fixes and breaking changes.

Some R packages may also have a ChangeLog, the purpose of which is to list all changes (including to source code). This is more relevant to the package developers, and over time it’s purpose has become increasingly subsumed by version control softwares like GitHub.

Since the guidelines above are a bit vague and open-ended when it comes to format, we will share some top tips and examples to help ensure your NEWS is readable and easily accessible!

R packages (second edition) recommends the markdown format (NEWS.md) over the plain text and .Rd formats. Some advantages of NEWS.md include:

In terms of how NEWS.md should be presented, we recommend something close to the template below, which includes both a major release (containing a lot of changes which have been divided into subsections) and a minor release:

When viewed in GitLab, this will be nicely rendered:

Note that the heading for each release is made up of the package name followed by the version number, and the changes are listed using bullet points. This also follows the format given in the tidyverse style guide which recommends that “each user-facing change to a package should be accompanied by a bullet” and that “each release should have a level 1 (#) heading”.

For enhanced readability, a major release with a lot of changes may be divided into subsections, including:

Note that items listed under Breaking changes should also be included again under the relevant section.

Rather than dividing into subsections, you could also label individual bullet points, as we have done for the minor release above.

For some of the changes above, we have credited individual developers and referenced the corresponding GitLab issues. These links have been automatically rendered in GitLab.

At Jumping Rivers we use a NEWS file format similar to the minor release in the example above:

The choice of this format is due to the fact we roughly follow the GitLab flow model and have a short merge request cycle. Thus, few user-facing changes are added to the main branch in any one merge request (in theory).

The quickest way for a user to access package news is with the news() function (from the base-R utils package), which can handle the NEWS, NEWS.md and NEWS.Rd formats:

If you’re working in RStudio, this will display the NEWS under the Help tab, identifying the version number along with each set of changes. The screenshot below shows an excerpt for {dplyr}:

If you don’t have the package installed, you can also point the function to the package folder location using:

where package_dir/ would be the directory containing the package folder.

When writing a NEWS file for your package, it is always a good idea to check that the news() function can correctly display it:

As an example, here is an excerpt from the NEWS.md file for the {benchmarkme} package:

This is perfectly readable and consistent with the guidelines mentioned above.

Now, here is the output from the news() function:

The date is getting picked up by news() as the version number, making it unclear which version each set of changes corresponds to. The bullet points also look off.

The news() documentation provides precise formatting guidelines for all three file types. For the .md format, the guidelines are consistent with our template provided earlier. However, if you also want to show the release date, this should be enclosed in parentheses. A good heading would then be:

Whilst the NEWS file is a great place to record user-facing changes to your package, you can’t be sure that people will actually read it. They could be missing out on some great new features that you have worked hard to introduce! Accompanying a version release with a blog post which highlights major new features and bug fixes can be an effective way to inform your users. This is also recommended by the tidyverse style guide.

From the user side you might find that looking through a NEWS file is fine for comparing a small number of changes or checking for new features. However, it can sometimes be hard to directly compare long lists of changes. Diffify is a tool that allows you to easily check what has changed between two versions of a package:

Disclaimer: We are developers on Diffify so may be slightly biased in recommending it, but we think it’s really useful and complementary to the NEWS!

The following links may be of interest for further reference on the structure and format of NEWS files: